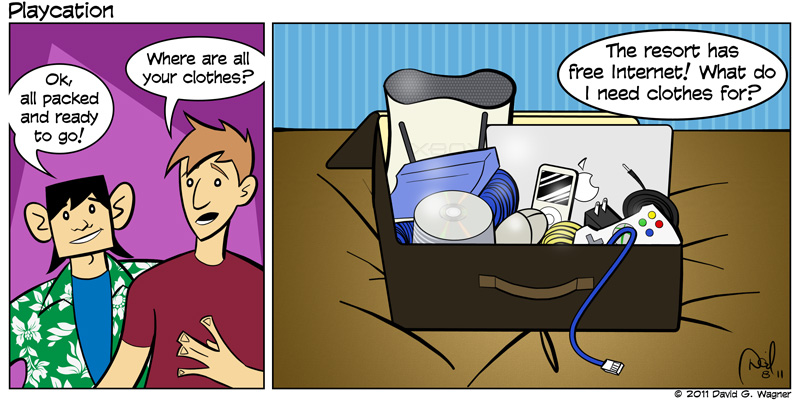 I’m going on my first “real” vacation since about 10 years ago. That’s not to say I haven’t had a vacation but flying back to the east coast to see my family isn’t anything like going to a sunny beach and drinking Mai Tais (sorry Mom). It will be nice to go somewhere and disconnect. No checking e-mails, Facebook statuses or endless Tweets. Although I’m sure at some point I will. Baby steps. That led me to the idea for this strip. Every hotel seems to have Internet so even going on vacation you can still connect if you want to. Doug wouldn’t know what to do if he was completely disconnected so why not bring all the comforts of home? Does it defeat the purpose? Yes. But Doug isn’t know to make the best decisions. I, however, will do my best. 😉 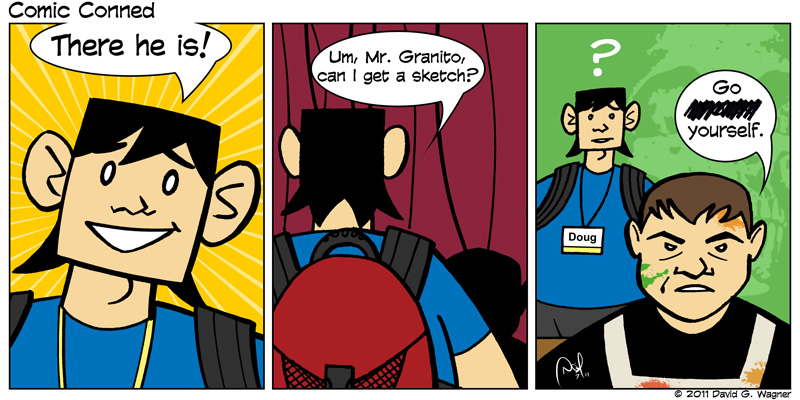 San Diego Comic Con is here! I’ll be heading down Friday to get in on the action. Feel free to find ME and I’ll give you a Dot Problems postcard and magnet (while supplies last). Now onto the comic.

There have been a lot of online articles regarding comic swiper extraordinaire Rob Granito on Bleeding Cool. Basically this guy copies other artists work then sells it at conventions as his own. This got me thinking that by now he is probably getting annoyed at every convention with people getting on his case about stealing (as well they should). My character Doug is too oblivious to know any of this and just wants a sketch from someone he assumes is a legit-o-mite artist. Rob, obviously fed up, answered Doug with a line from the X-Men: First Class movie (there are spoilers so I won’t ruin it for you if you haven’t seen it yet). Just so everyone knows, the incident in my comic strip DID NOT HAPPEN. Well, at least not to me anyway.

If you are visiting this site because I met you or you got one of my postcards at Comic-Con; WELCOME!! Follow and Tweet me to say Hi! Or LIKE the brand spanking new Facebook page!! Thanks for visiting! 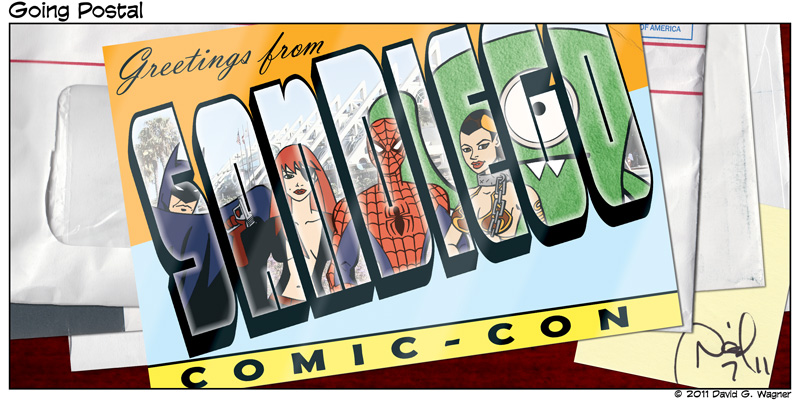 No Comments on Going Postal

San Diego Comic-Con is soon approaching! This year I was able to book a GREAT hotel and am looking forward to all the fun! Even my girlfriend is excited! I’ve been thinking of some cool promotional items that I could do for Dot Problems and finally it hit me. Postcards! I was originally going to design one that featured Doug falling with the logo following on a white back ground into darkness or something. I drew the image and never finished it. It just wasn’t right. Why would someone pick it up and actually KEEP it? They wouldn’t. Then I thought of all those “Greetings From” type postcards and WHAMMO, jackpot! So I researched some old school designs and decided to create one based solely on SDCC. Not only will it be a cool promo item but you can actually USE it! Yes if you want to you can mail it! Or if you find me at SDCC I’ll sketch on the back or write a note to your loved one or friend. Either way it’s a win-win!! I’ll be bringing a bunch with me to SDCC to give out or just leave at random hotels and bars. Maybe next year I’ll get an Artist Alley table. Who knows. I just want to keep being creative and have a blast doing it. 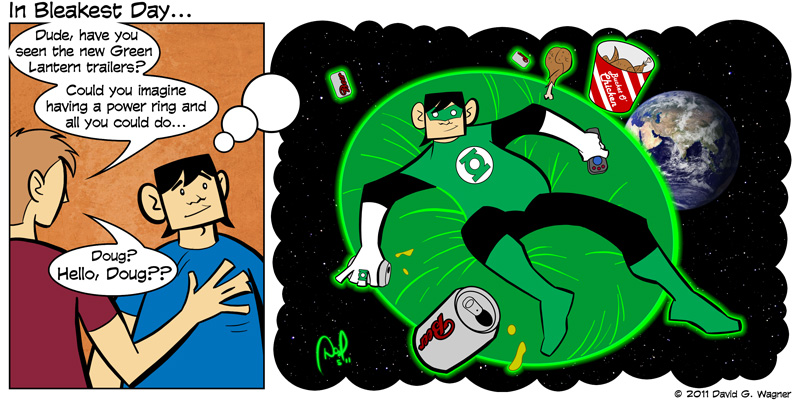 This strip was inspired by all the tweets that came out shortly after the Green Lantern WonderCon trailer made its debut. That trailer really got everyone amped up for the movie including myself. It looks like a fun summer blockbuster! This year is definitely the year of the comic book movie! I may even do some strips about Thor (well another strip) and Captain America, who knows… 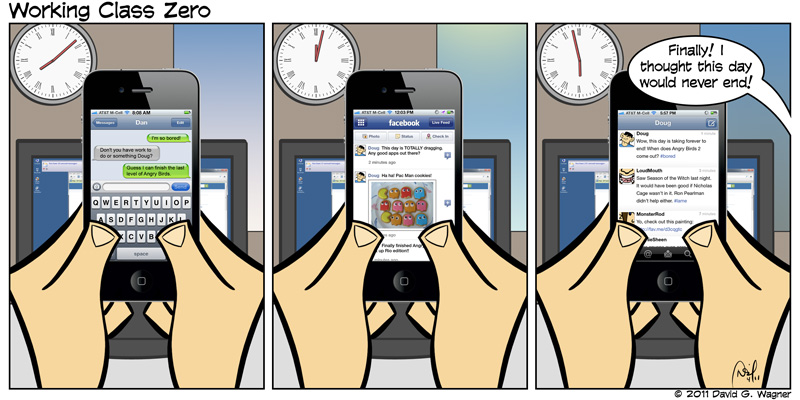 I recently got an iPad 2 and have been playing with it non-stop. It can eat up huge chunks of your time. That led me to the idea that some people probably use their iPhone (BlackBerry, Droid, whatever) to text or play games at work more than they should. Doug is one of those people.

Here is a HUGE version of the strip if you want to read the phone text. I didn’t think the actual text was as important as showing the passing of time. I like to add little things like e-mails going unanswered and no desktop activity as well as mindless texts, status updates and tweets.

I thought this strip was going to be a quickie since 90% of it was all created in Photoshop. It wasn’t so quick. Editing screenshots is a pain in the butt. Special thanks to Maria for the iPhone screenshots. 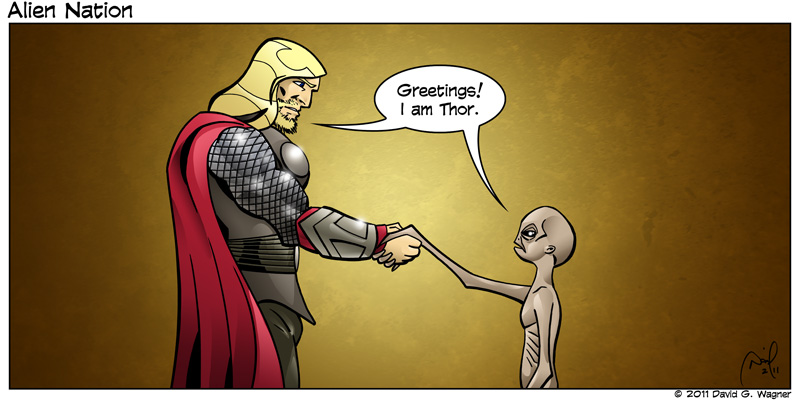 This strip is a little different than past strips because it is based solely on Internet rumor. If you don’t like spoilers you can stop reading now and enjoy my confusing strip. If you don’t care, highlight the text below to read more.

I read on the Internet that they will be changing the origin of Thor for the upcoming movie. To prevent backlash from religious groups Thor and the other Asgardians will be…… ALIENS! When I read that, this strip immediately popped into my head. If you ever watched Stargate SG1 then you would understand. In SG1 all the aliens they ever encountered on the show were the basis for the gods on Earth. The Asgardians were one of the oldest alien species and were lead by Thor, a 4 foot tall, skinny, bug eyed alien. So Thor, meet Thor!

It’s probably not even true but in any event this strip was fun to do. I went old school and actually inked this one with Pitt pens instead of Photoshop. I need to do that more often. 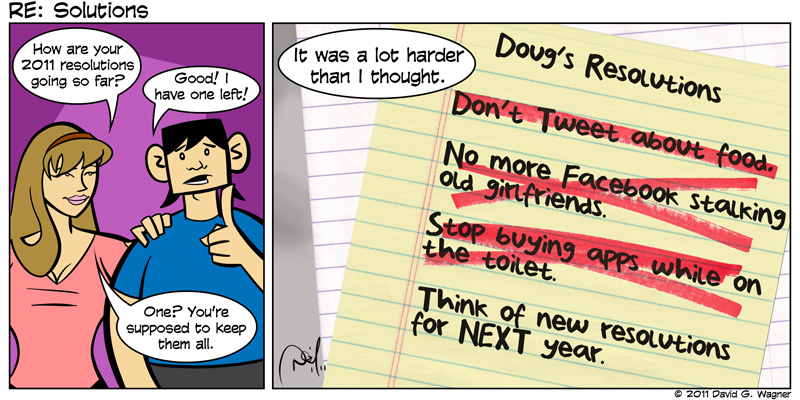 Well 2011 is here, and has been for almost a month. My resolution was to draw more and update this comic more often. I’ve been drawing more but updating this comic… not so much. I have a whole year to remedy that though. Maybe I’ll win the lottery and end up relaxing all day drawing til my heart’s content. Until that happens, enjoy this months strip! 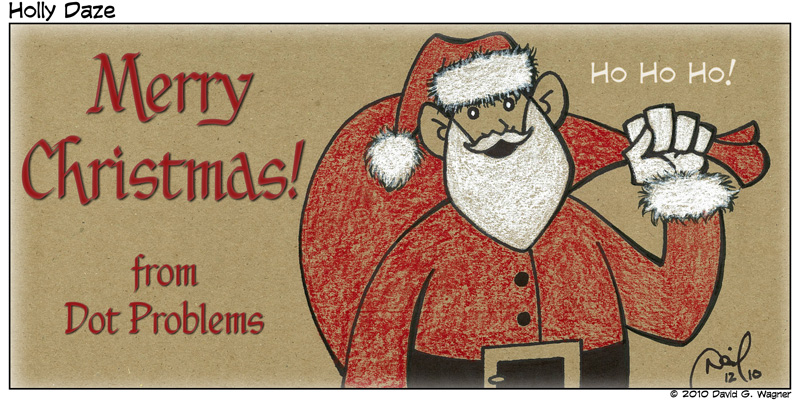 I am currently in PA with my family and wanted to post a little something for the holidays. If it looks a little different it’s because it was drawn on recycled paper, inked with Sharpie/PITT pens and colored with colored pencils. After 2 trips to Staples I was able to scan it into Photoshop for the finishing touches. Hope you have a great holiday; I will! 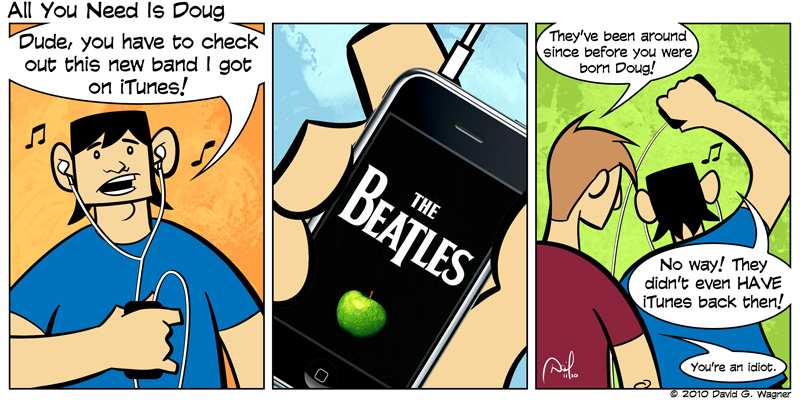 The recent Apple announcement was that the Beatles are now available on iTunes. That spawned the idea that there may be some people who have no idea who they are and think they are a new band now available on iTunes for the first time. Doug is one of those people. I’m not quite sure who this announcement was directed at. All the Beatles fans I know have their entire catalog on different formats and multiple copies thanks to the re-releases and remastered editions. So enjoy the Beatles tweens!

If you are checking out this page because you read Chew #15, Welcome! I’m trying to update more often so check back regularly. Be sure to check out my Chew pinup full size, HERE. Thanks!! 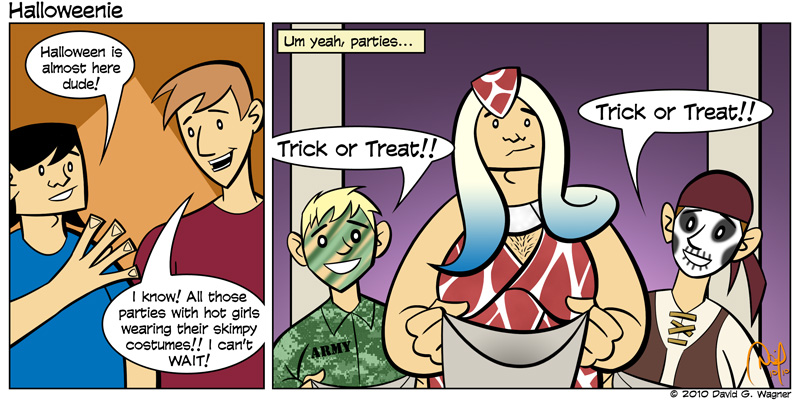 As an adult Halloween means having an excuse to dress up like you did when you were a kid and behave in a similar fashion. I always have a blast and can’t wait to have fun this year!